While thumbing (figuratively of course) through the 50 or 60 uncompleted posts in my Drafts folder I came upon this proposed entry from last fall. Though it was written as fresh tomato season was coming to an end it is not inappropriate to the imminent arrival of the first home-grown tomatoes in the local market.

If muttering those words as I wandered through the produce section were a criminal offence I would have been arrested many times over!  There is nothing more frustrating than being confronted by those pale reddish-pink balls of flannel that appear in most supermarkets here in Canada for what seems like ten months of the year.  Nor is there anything more glorious than the multi-coloured displays – purple to yellow to orange to fire engine red – that greet the tomato lover at farmers’ market during the all too short growing season.  Even the later rainbow display has only become the norm over the past fifteen years with the reintroduction of varieties into the market.

One of the joys of living in Italy was the constantly changing variety of tomatoes in the market.  You never went shopping for just a tomato or without knowing what you wanted it for.  There were tomatoes for sauce, tomatoes for roasting, tomatoes for stuffing, tomatoes for salads, tomatoes for soup, tomatoes for sun-drying, tomatoes for pizza toppings, and even tomatoes for hanging.  Yes you did read that right – there is a tomato known as  pomodorino del piennolo del Vesuvio (small hanging tomato of Vesusius) or simply pomodorino Vesuviano. Whole vines are cut and hung up in bunches in a covered but well ventilated area.  They keep fresh for months, thanks to a thick skin and a strong attachment to their stalks.

When the tomato reached Europe from North America somewhere in the 16th century what the Aztec’s knew as xitomatl became tomatl. The French originally called the tomato,  pomme d’amour (love apple) before calling simply it la tomate. Perhaps they changed the name when its claims to be a powerful aphrodisiac proved to be false advertising.  In Italy it was pomi d’oro (golden apple) which today becomes il pomodoro.  And of course it was shunned as being poisonous because of its close relative the deadly nightshade.  However somewhere in Southern Italian someone noticed that it was being eaten by livestock with no noticeable rise in the mortality rate.  It wasn’t killing the animals?  Well let’s see what it does to Zia Giuseppina, she’ll eat anything!  And eccolà!

So why all this ruminating about Solanum lycopersicum even as the (extended) season winds down?  Well on a trip to the Farmers’ Market last week I saw what is probably the last of the season’s harvest and  I thought I should buy and use them while I can.   One recipe that I used I first came across back in Warsaw in 1998 and it became a fast favourite there particularly when a tasty amber gold plum tomato was in season.  I think I may have got it from the Times of London back in the days when their young website was free. Note that the quantities are given in metric followed by an approximation in Imperial.)

Directions:
Preheat oven to 400F.
Briefly process the flour, polenta and butter in a food processor, then add the egg and about 2 tsp oil – enough to bind the dry ingredients. Wrap in plastic wrap and chill briefly. Rollout to fit a shallow 28cm (11″) tart tin, prick the base all over and chill again.

Spread the mustard evenly over the base then top with the cheese. Lay the tomatoes on top in concentric, tight, overlapping circles, so they stand proud. Season well with salt and pepper. Bake for 45 minutes then switch off the oven.

Place 75g of the arugula in a processor with 5-6 tbsp olive oil and process until you have a thick but pourable puree. Drizzle this over the tomatoes and return to the oven for 15 minutes. Remove and cool for 15-20 minutes.

Just before serving season the remaining arugula with salt, pepper, and a little oil. Pile into the middle of the tart.

The recipe also suggested that a mixture of Gruyere and a mild goat cheese can replace the Parmesan. And when I discovered on my return to Canada that arugula, so readily available at our local vegetable stand in Warsaw, wasn’t always available in Ottawa I used Basel and it works beautifully.

July 18th is another one of those days we celebrate strange food combinations: Sour Candy and Caviar??? Talk about your “fusion” cuisine!

L’shanah tovah tikatev v’taihatem (May you be inscribed and sealed for a good year). 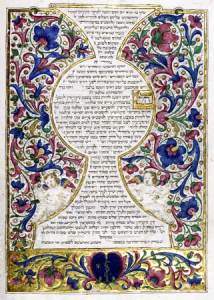 This is a page from an Italian manuscript published in 1490 stating the rules for the celebration of Rosh Hashana, which began the Jewish High Holidays earlier this week.

Quite by chance we were in the Ghetto for dinner the night before at a restaurant which had been recommended in one of the tourist magazines. Ba’Ghetto is one of four or five restaurants on Via portico d’Ottavia and advertises itself as “the best Kosher restaurant in Rome”. And if one goes by food alone it is exceptional, their Concia of zucchini was perfectly spiced, the goulash fork tender and the steak cooked to perfection. I would like to be able to comment on a few other dishes on the menu but it seemed that every second item was unavailable as were certain (cheaper???) wines. And we were told so with a take it or leave it shrug – and that was the major problem: the service. You become use to arrogant waiters here, it is all part of the game in certain restaurants and can be, believe it or not, entertaining. Sadly this young man could not carry off arrogance and was simply rude. At one point he walked away as Laurent was giving him his order. And the entire staff seemed disorganized – even for Rome!

I looked longingly across the street to La Taverna del Ghetto where we had eaten two weeks ago – there the food was excellent, the owner friendly and the staff – well they perform in true Roman tradition. And they had one of my favorite Roman-Jewish starters – Roast Half Tomatoes.

There is a very strong Jewish tradition in Roman cooking and many of the dishes that are consider local have their roots in the Ghetto kitchens – Carciofo (Artichokes) alla guidia, Tortino di aliciotti e indivia (anchovy and endive pie), many of the salt cod recipes and traditional dolci such as Prune and Pistachio torte.

This picture from their website doesn’t half do this dish justice.

And of course those tomatoes – strange how I love food that seem to have the plural case ending “toes” – I mean don’t get me started on potatoes!

Here’s the recipe for those roast tomatoes – that can be used as a side dish or even as a dressing for pasta with a little bit of the cooking oil.


Wash the tomatoes and slice them in half across the width. If there are a large amount of seeds, remove at least part of them.

They can be served hot or at room temperature.

They can also be prepared several days ahead but since they are to be reheated they should be refrigerated with some or all of the cooking oil covered very tightly with plastic wrap. To reheat, return to a 325f-170c oven for 10 to 15 minutes.

PS: In answer to CP’s comment – if they are drained properly there should be a good deal of oil left but I’m not sure how good it is for other uses but I do use it when the recipe is for pasta and it should be used to moisten the pasta when it serves as a saucing.