Back in the Plasticine era – okay maybe not that far back ’cause that would have meant kindergarten – but back while I was in Junior High I developed a passion for Shakespeare. My father had taken me to my first Shakespeare play when I was ten – an adventure in a tempest to see the play of the same name that I really must recount one day (that man was a saint!).  My sister-in-law, always one to encourage an eager young faggot in training mind gave me a worn copy of Tales From Shakespeare by Charles Lamb and his sister Mary.   This rather odd brother and sister team  retold the stories much adapted to the sensibilities of children of their period – no bawds or bawdiness for the Lambs!  It had some interesting Arthur Rackham illustrations and served as a good introduction but I soon graduated to the real stuff.   I plowed my way through the canon from All’s Well to Winter’s Tale. Now that’s not to say I understand a good deal of what I was reading but being in those days a fairly good actor I gave a passable imitation of literary precocity.

By the time I hit the first year of high school, as my fellows were struggling with the authorized for Ontario school’s edition of Macbeth, I was trotting around with a copy of the unexpurgated version where the Porter “did bepiss” himself.   My English teacher was not pleased when I asked why we had skipped an entire scene which obviously would have had them rolling in the aisles of the Globe – and sent my classmates snickering.  I had to serve a “library” detention for my youthful  inquisitiveness or perhaps because I was being an obnoxious little show off???? 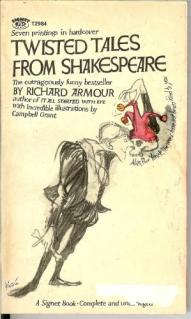 And in that same library there just happened to be a critical study of “The Works” that gave a decidedly different twist to Shakespeare’s Tales.  In fact in his introduction to Twisted Tales from Shakespeare Richard Armour promised that:

Shakespeare’s best-known plays are presented in a new light, the old light having blown a fuse; together with introductions, questions, appendices, and other critical apparatus intended to contribute to a clearer misunderstanding of the subject.

Some of the humour was sophomoric but as with any good satire it was based on a thorough knowledge of the plays and much of the humour depended on the reader knowing their Shakespeare.
Because of Mr Armour’s little book I discovered that there was a wealth of memorable lines beyond the Tomorrow and Tomorrows, the Where For Art Thous and the Quality of Mercies.  I mean where else, other than that original unexpurgated text of the Scottish play, would I have found and remembered:

Which leads me to today’s Lunacy.   As well as being pretty handy with blank verse and the odd rhyming couplet Shakespeare was pretty good at the snappy put-down.  Every one of the words or phrases in the lists below are taken from one of “The Works of”.

The game’s a pretty simple one:  Take one word from each of the three columns below and preface it with “Thou”:

The combinations are almost limitless and just think how you will stop friends, foes and families in their tracks.  I mean who could possibly find the appropriate retort to:  Thou pribbling unchin-snouted skainmate?  Damn did that man know how to write!

16 April – 1346: Dušan the Mighty is proclaimed Emperor, with the Serbian Empire occupying much of the Balkans.