I always look upon these Sharing posts as a two-fold opportunity – I can bring your attention to some of the wonderful posts I’ve found in the past few days and put up some of the photos that I‘m frankly too damn lazy haven’t had time to get to as photo essays. This time around its some photos from my Torino, Genova, Parma opera week back in late October.

This fascinating bronze entitled “Out of Africa” was prominently placed in the lobby of the Teatro Regio di Torino. I have mixed reactions to it – it is a beautiful piece but something about it disturbs me.

More often than not the holy water fonts in churches here are either dry or have a small bowl of water placed in them. But in Torino’s Chiesa di San Filippo Neri the font was more a fountain of holy water.

Il Museo Egizio in Torino has one of the finest – and stunningly displayed – collections of Egyptomania in Europe. I was particularly taken with this gold and lapis necklace. The pyramid as a display may be the obvious choice but it is subtly handled. Click for a close up.

The gates of the Palazzo Reale in Torino are a direct steal from Versailles but wasn’t every palace in Europe? 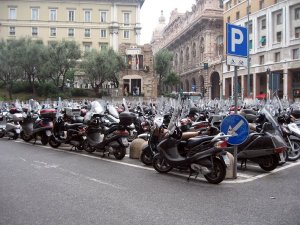 That’s the house of Christopher Columbus in Genova sticking up in middle way back there. His front yard is now a parking lot for motorinos – that’s one way to destroy the lawn and bring down prices in the neighbourhood. 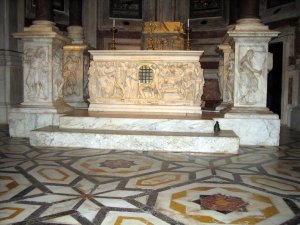 This altar in il Duomo di San Lorenz once held relics of San Giovanni Baptista, the patron saint of Genova. His story is retold in the stone carvings in and around the altar. I’m constantly fascinated by the use of coloured marble throughout the churches in Italy – designs and colours always created to take the eye to a focus point.

Though the waterfront in Genova has been restored – and magnificently – its is still separated from the historic centre by an elevated freeway. There is no way to see this fascinating painted facade the way it was meant to be seen – approaching from the water. 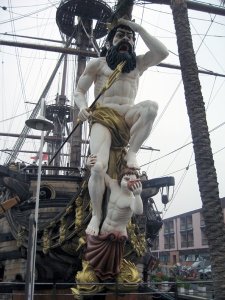 A complete replica of a Turkish galleon is moored beside the Aquarium on the waterfront. It was original created for some Roman Polanski film and is now a tourist attraction. The Neptune figurehead is a great example of the carver’s art. 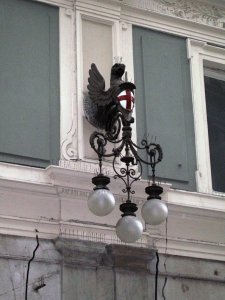 The Cross of St George (red cross – white background) features in the coat of arms of many cities throughout the world. It’s the municipal coats of arms in both Milano and Genova in Northern Italy – as in the New World it is in Montréal

I only intended to pop into the Aquarium in the harbour for a few minutes and ended up spending over 2 hours. Though not a fan of zoos or the like I found a peaceful fascination in the unusual sea fauna. I really must post a few more to these shots of jelly fish, I found them incredibly beautiful.

I often wonder if the current crop of operatic stage directors ever read the libretto or score of an opera – or do they just listen to a CD while giving the synopsis a quick read over? Take in point the opening production of the season at Teatro Regio Di Torino: Cherubini’s Medea. Now I’m sure director-designer Hugo de Ana is an educated man and knows the story of Jason’s betrayal of his wife, the barbarian princess Medea and he is also more than aware that it is one of the great epic myths. In an interview he stated he wanted to make the story timeless – not of an age but for all ages – so in an effort to do that he set it squarely in the 1930s???? 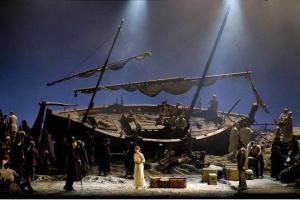 His set – he’s a well-known multi-tasker and did the costumes as well – was a very realistic Greek seaside with a beached ship (Jason’s Argo? the ship that brings Medea to Corinth? A ship of fools? – not quite sure on that one) tilted at various angles for each act until it flew up in the air shooting out flares and fireworks like an alien spacecraft as the opera ended. When the cast weren’t scrambling over rocky outcroppings and steeply angled decks they were skirting around suitcases and crates strewn across the stage – Oh I get it Medea is wandering homeless but did she have to bring everything she owned back in Colchis with her. The 30s costuming meant that King Creon (Giovanni Battista Parodi) resembled nothing more than a Greek Big Daddy surrounded by Fascist hoods and the mighty warrior Jason (Giuseppe Filianoti) became a social-climbing cafe dancer in a very trendy three-piece suit and Borsalino. And in her black dress and smart ankle-straps Medea looked more like a pissed-off refugee from Desperate Housewives than a vengence bent sorceress. The great revenge myth had been reduced to a soap opera domestic crisis.

This was unfortunate as the Medea was one of the great singing-actress around today, Anna Caterina Antonacci. Anyone attempting this ball-busting role (sorry that may not be politically – or anatomically – correct but its accurate) is fighting with the ghost of the singer most identified with it in the 20th century: Maria Callas. The Callas Medea is one of those performances that if you were to believe half the comments you read was seen by more people than saw the opening of the Beijing Olympics. It is the nature of operaphiles (I’m using the polite word here) to bemoan the passing of the Golden Age and I have been as guilty as the next opera queen goer of keening like a widow at an Irish wake about times past. But I’ve only heard the Callas Medea, never seen it so other than pitting a recording from the 1950s against a 2008 live performance I can’t make comparisons. Antonacci is her own Medea and despite the production imposed on her she seared across the stage both dramatically and vocally. If she didn’t succeed completely – and who in this role has, including (gasp) Callas – I put much of it down to her willingness to work within the director’s concept.

Certainly her two duets with Filanoti had a dramatic intensity that was almost frightening and brought out a power in the tenor that had been lacking in his first act aria. They became the great centrepieces of the drama that they should be. Sadly the confrontation with Creon suffered because of Parodi’s tendency to force and de Ana’s bright idea of having the King’s fascist thugs chase and then rough up Medea’s old nurse, Neris, during the scene. Sara Mingardo sang Neris with conviction and her touching lullaby-lament was beautifully delivered. Again it was undermined by the direction – according to the libretto, she cradles Medea in her arms as she did when she was a child, here it was sung to a caged bird while hugging a suitcase. I won’t even try to figure out what de Ana was getting at. 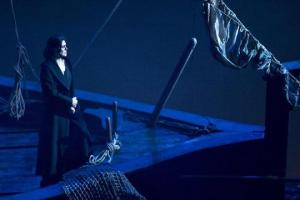 His attempt to upstage Medea’s great third act arias by having Neris bath the children behind her – shades of the Passolini-Callas film – were defeated by the sheer force of Antonocci’s vocal and dramatic power. She pulled our attention back downstage to the now vengeance consumed Medea as she pleads with the gods and finally chooses to take her final revenge on Jason. Her sudden appearance, in exactly the same position, covered in the blood of her slaughtered children was a remarkable coup-de-theatre but again de Ana could not leave well enough – rather than the blood stained Medea consumed by fire we had to have that bloody air-born ship as the final image.

Conductor Evelino Pido had previously conducted Antonacci’s Toulouse Medea with great success and repeated it here. He drew sounds from the pit that were astounding given what sometimes emulates from Italian theatre orchestras. The introduction to Act 3 with its threatening storm was particularly effective and the applause for conductor and orchestra at the curtain calls was well deserved.

Looking over what I’ve written I may have dwelt a bit too much on the physical side of the production but I honestly feel that de Ana’s overall concept and Antonacci’s willingness to go along with it did much to rob the evening of the fire that this work demands. I went expecting the epic drama of revenge in Corinth and much of what I saw was a hissy fit on Wisteria Lane.