*to snicker, laugh behind your hand

On this day in 1784:  Russia founds a colony on Kodiak Island, Alaska.

As difficult as it is to believe it’s been over five years since we left Italy and there are times when I still miss that wonderful country.  Chiefly I miss my beloved friends there, but also the cuisine, the culture, the climate, the chaos, and the confusion.  Yes I honestly sometimes miss those last two defining characteristics of that mad beautiful country. What I do not miss is the sheer lunacy of bureaucratic moves such as this:

Some one painted this little scene on a wall just off Borgo Pio near the Vatican.  I don’t know about you but I find it charming and also telling – Peace has won the day in the game of Xs and Os played by the Bishop of Rome.  And frankly I can almost see this happening – spying Swiss Guard and all. 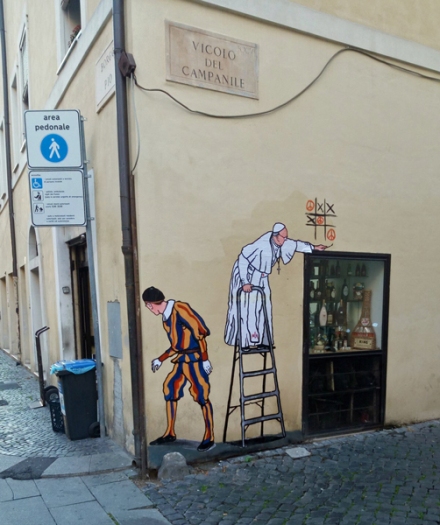 However someone at the Vatican or  Roma Capitale (or both) thought otherwise and within a matter of a day or two sent out a crew to remove the “offending” art.

Would that they were so quick in rid the glorious buildings and monuments of the mindless graffiti that covers so many structures in the city. 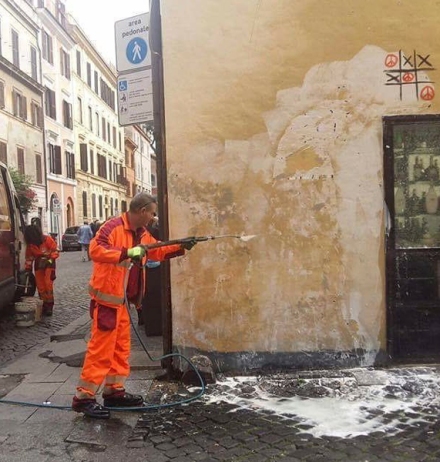 As one Roman friend said when they saw this:  Perhaps they should send these guys to do something useful like pick up the garbage that litters the streets – or maybe fill in a few potholes – or even clean the gutters so that street won’t flood during winter rains. 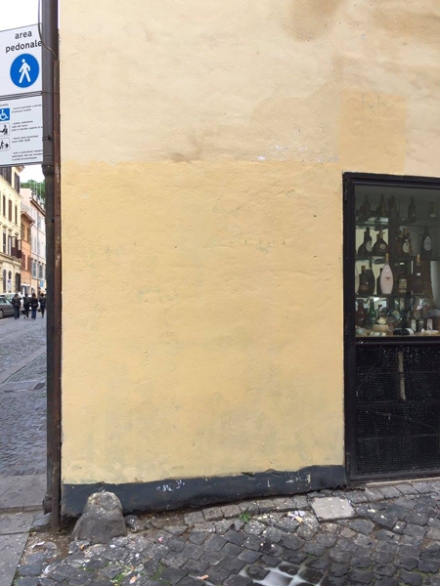 Many thanks to my friend Robert, a long time resident of the Eternal (and eternally surprising and maddening) City for posting this originally on Facebook.

On this day in 1813: The Battle of Leipzig concludes, giving Napoleon Bonaparte one of his worst defeats.

Well its been two years since I wandered the streets of Rome and the past few days have been like many homecomings after a time away – much has stayed the same and much has changed.  Somethings for the better other things not so much.

November 3 – 1868:  John Willis Menard was the first African American elected to the United States Congress. Because of an electoral challenge, he was never seated.

I know its been over six months since I left Roma and Italy but I realize that my friend Rebecca was right when she said “give it a year”.  Every so often I get an wave of homesickness for the place and, most especially, the people and today when I received photos of Roma in the snow from those people  was one of those “oftens”.  Yes I know we have snow here in Ottawa – boy do we have snow, and freezing rain and -35c days – but its not the same.  Here snow is a daily thing and a bother, there its a rarity and romantic.  Well okay its romantic except for no buses, no trains, motorini buried under snow, icy cobble stone streets and the mess when it turns to slush.

Today for the first time in many years – though I do remember a brief snow storm two years ago – it snowed in Roma and snow is forecast for the next few days.  North of Firenze it has been dire – temperatures in the minus teens and snow.. lots and lots of snow.  Not that snow is an unknown in these areas, just that this past few days have been exceptional – but understand there is no climate change!

But I digress – often according to some of the finest psychoanalysts a sign of denial.  I awoke this morning (afternoon his time) to these photos that my friend Marco sent as he attempted to get home from work – his being the motorino buried in the snow.

Then later in the day – evening his time – cher Lionel sent this photo of Piazza Navona in the evening snow.  If I read his posting correctly – and from what I’ve heard from other people about buses having problems getting up those Seven Hills of Rome – he walked the 3.5 kms from our old neighborhood to Centro.  Such an athlete!

Sorry how the hell could I not be homesick?

Just a reminder that a left click will enlarge the photos – particularly the last two panorama shots.

Well theoretically I guess the last day of Christmas is the 6th of January but in my old parish we celebrated octave days – a practice whereby a major feast could have an additional celebration on the following Sunday. So to celebrate the Sunday within the Octave of Epiphany we joined Olivia, Tora and Diana for a walk around a few of the presepe in Centro. Most of them will be dismantled today (Monday) though a few will stay up until February 2 – the Presentation of Christ in the Temple.

Though our journey started with the Neapolitan Presepe at Santi Cosimo e Damiano at the Fori Romano the purpose was to see presepe with a Roman flavour. However it was a fitting place to start as it combined the two historical links of the presepe in Italy – its introduction as a major fixture in the Feast of Christmas by San Francisco (the church is Franciscan) and the artisans of Napoli who created, and still create, some of the most elaborate Nativity scenes imaginable. Commissioned by King Ferdinand in 1780, it led to an entire industry being built up around it including porcelain manufacturing and the silk factory in San Leucio in the Caserta region near Napoli. It became a favourite pastime of noble women to work on elaborate costumes for the various characters that populated the every growing scene. As beautiful as it is unfortunately it needs a good cleaning and a surer hand at lighting and display. 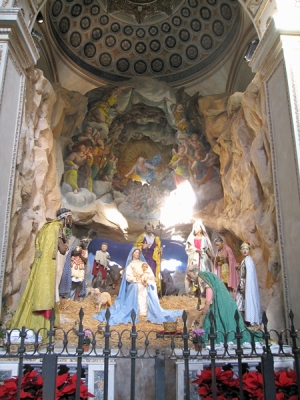 At the Church of<a href="http://en.wikipedia.org/wiki/Santa_Maria_in_Aracoeli&quot; target="blank
“> Santa Maria in Aracoeli the presepe is traditionally set up in a side chapel and on Christmas Eve the miraculous Santo Bambino is placed in the manager where it remains until the 6th of January. Legend says that the statue of the Bambino was carved from a piece of olive wood from the Garden of Gethsemane and that a wild storm struck the ship that was transporting it back to Italy. In an effort to lighten the ship everything that could be had to be thrown over board including the carving. Miraculously the ship made it to home port and equally as miraculously the Bambino followed in its wake and was retrieved from the harbour waters. It (a copy I might add as the original was stolen in 1993) had already gone back to its chapel and had been replaced by a plaster Bambino on Sunday. 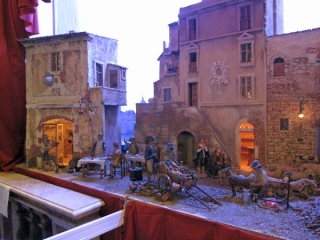 Two churches along the Corso have presepe that leave no question as to where their Nativity is taking place. At San Marcello al Corso the ruins of the aqueducts tower in the background and the pines are decidedly Roman. There was a symbolism to setting the birth of Christ amongst the ruins of the old civilization – the old ways had been destroyed but the new faith flourished out of them. Santa Maria in Via is unusual in that the setting of their presepe changes from year to year. Last year Castello Sant’Angelo was silhouetted against a star light sky – this year they have moved to the other side of the Tiber and the shores of the river can be seen in the background. It gives a picture of Roma when there was not embankment and the Tiber was still the life blood of the city with buildings built right to its edge.

The presepe on the Spanish Steps was once a more elaborate affair with dozens of figurines portraying life in Rome. However vandalism and financial attrition has wheeled down the number of terra cotta inhabitants of this quartiere of the city. It once reflected early 19th century life, as indicated by the uniforms of the Papal Guards, in the area surrounding Piazza Navona (one of Roma’s famous talking statues, Pasquino, can be seen at the far right). Sadly the friggiteria, which once would have had elaborate examples of their fried foods, looks like it has been stripped of all its wares and no one seems to be drinking at the Locanda either.

The day before we had been down in the area of Piazza Navona for a visit to the newly restored Museo di Roma. That had been followed by a stroll over to try and get one of the legendary coffees at Cafee Sant’Eustachio however 40 or 50 other people had the same idea so we gave it a pass. However the presepe at Chiesa Sant’Eustachio was a perfect example of the Nativity within the context of familiar surroundings. The scene is a replica of the Piazza in front of the church including a view of the distinctive bell tower of Sant’Ivo.

Today we followed the local custom and took down our presepe and stored it away just as most of the parishes throughout town have done with theirs. Unlike the churches here when ours is next set up it will be in a different place but like theirs it will be the familiar retelling of the Christmas story.