My blog buddy Mitchell post a wonderful series of pictures from the crèches or belén in his town of Fuengirola that brought back memories of the presepe we saw in cities, towns and homes throughout Italy during our four Christmases there.

At the centre of each one was the familiar Nativity scene but what surrounded it seldom resembled the landscape around Bethlehem familiar from Christmas cards. The Holy Family were encircled by the traditional Shepherds, Magi and Angels but set in panoramas that mirrored the surrounding neighbourhood. Castello Sant’Angelo loomed in the background at Santa Maria in Via, in Napoli a plume of smoke from Vesuvius oversaw the birth of Christ, in Piazza Sant’Eustachio the filigree tower of Sant’Ivo peeked over the rooftops. The birth of Jesus is happening, not in a distant exotic place, but in the midst of the people who are celebrating the Feast Day.

As well as the link to Mitchell’s photos – the belén created by the children is a true delight – I thought I would reblog a post from those days in Rome. It is only a fragment of what would have been a larger scene but looking at it today gave me a sense of delight and brought back great memories.

Its no secret that I have a fondness for Napoli and things Napolitani – even though the first visit there was a bit unsettling, the second time I came away from the city enchanted and wanting to go back. And another well documented fact is my love of presepe and there is nowhere in the world quite like Napoli for these incredible minature scenes. Divina, the restaurant we went to New Year’s Eve in Madrid had the most wonderful presepe at one end of the dining room that was immediately identifiable as the work of Napolitani craftsmen.

As is this remarkable little tableau that was in the window of a small cafe on a side street off Piazza Fiume near our house. It is obviously meant to be only one element in a larger presepio. (Remember that a left click will open a larger version of the photos in…

Today is the Feast of the Epiphany, the day when Christian tradition says that a group of men from the East came to Bethlehem bearing gifts for a child who’s birth they had read in the stars.  There are many legends and stories that have built up around these men which I recounted in a post back in 2013:  One Fine Day I Met Upon Their Way.

One of the stories that I never tire of is the Italian legend of La Befana who’s visit was celebrated last evening in Italy and many Italian communities around the world.  I was rather disturbed when I saw that the Italian Community in Ottawa referred to her as “the Witch of Christmas”.  As I have said countless times in the past La Befana is not a witch but simply an older peasant woman who did indeed meet the Three Kings as they went  upon their way.  As with all legends there are many variations of her story and of the several I’ve told over the past eight years I think the one I recounted on our last Epiphany in Italy is my favourite:  Viva La Befana! La Befana. 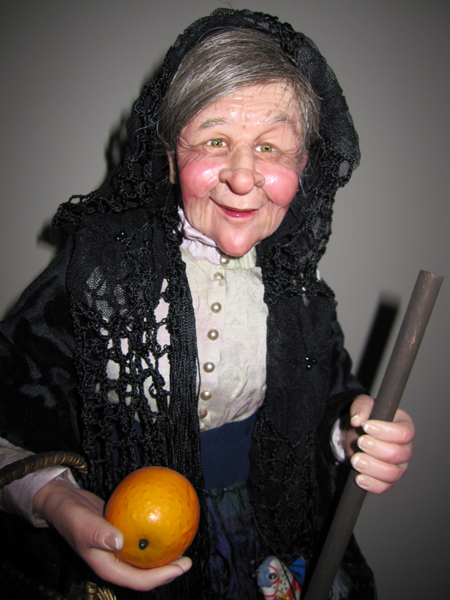 La Befana comes by night
With her shoes old and broken
She comes dressed in the Roman way
Long life to the Befana!

And again my wish for all my friends in Italy and any place where La Befana has visited is that she continues to do so.  That for that one night of the year she is allowed into homes and for that brief time the children of the world truly become hers.

On this day in 1616:  English Restoration – The Fifth Monarchists unsuccessfully attempt to seize control of London, England.

As she has done for almost a thousand years if not longer, tonight La Befana will mount her broomstick and fly from house to house in Italy and in Italian households all over the world.  The good will be, justly, rewarded with sweets, fruits and perhaps a small gift; the bad will reap the rewards of their badness – a lump of coal or in some households a turnip.

Given the onslaught of Halloween – a holiday unknown in Italy until a decade ago – and the appearance of Babo Natale (Santa Claus) there is a chance that this lovely and age old tradition will disappear before the forces of marketing.  However this little vignette on YouTube from Walks of Italy gives me some assurance that she will not go the way of the zampognari or shepherds who would come down from the mountains and serenade Romans with the bagpipe carols.  Let’s hope that when Beatrice wakes up tomorrow there will be both “sweet carbone” and an extra treat for being a good girl and sharing her traditions with us.

I’ve written extensively in the past about the stories – there are several versions of her history – and celebration of La Befana.  As I said last year each story enriches both the old lady and the traditions surrounding her.  If you haven’t read them before do take a look; if you have, well a second look does not harm.

To all my loved ones in Italy – don’t forget a glass of warming wine and a biscotti will help the old lady on her way in the cold night.  And my hope is that when you wake in the morning La Befana will have left your stockings full of good things and for that once or twice that you just may have been less than good a lump of carbonne but like Beatrice carbonne dolci to sweeten the experience.

And once again this evening, as she has done for millennia, La Befana flies from house to house in Italy – and I’ve been told in some part of Canada too.  On her first journey she searched for the Christ Child but being told that she could find him in each child she made it her task to reward children for their good deeds with sweets, oranges and small gifts.  But being a wise woman she knew that no child was ever always good so she keeps a supply of coal and turnips (?) for those times when behaviour deserved not reward but a reminder to be better next year.

I’ve written on several occasions about the many stories of how La Befana became, for one night of the year, the guardian of all the children.  Each variation makes the story of this old woman richer and more endearing and I can only hope more enduring.

To all my friends and loved ones in Italy, I hope with all my heart that La Bifana rewards you for your goodness and is forgiving of those bad times.  Viva La Befana Viva!

Tonight, as she has done for the past thousand years – or perhaps two thousand if legend is to be believed, an old lady will wander through the streets, alleyways and roads of Italy looking for a special child.  Some say she is seeking the Christ Child, others that it is her own lost child she seeks and still others say it is all children because for one night a year they have been left in her care.  Her head swathed in an old scarf to protect her from the cold, dressed in a tattered house dress, wearing a pair of scuffed boots – though sometimes she wears sandals or even goes barefoot – and using a broom as support but more often as transportation she will go from house to house.

At each house where she stops she leaves small presents in the stockings that have been left out by the children of the family.  If she finds that the child has been bad there may be a lump of coal or an onion but more often she rewards children for the times they were good with sweets, oranges, toys and games.  And because she comes down the chimney and is a good housekeeper she sweeps away the soot so no trace of her entry can be found.  Then, if thoughtful children have left one behind, she may partake of a glass of local wine or even a biscotti  to warm her old bones and give her strength to continue her journey on to the next house.  It is also known that if she is spied upon she will take her broom stick to the offenders and never visit them again.

Over the past few years I have written about the various versions of the story of La Befana and it seems each year I find another one including this rather lovely variation on her tale at My Merry Christmas.  It is a tradition I have grown to love and cherish as part of my Christmas  and once again this year she graced the tree and has been keeping an eye on things from the hutch until the 12th day of Christmastide comes to an end and things are put away until next year.

Though her tale is now steeped in Christian mythology it is likely that her origins – as with much in Christianity – are pagan.   She may be related to Strenua the Sabine goddess of strength and endurance whose feast came at the beginning of the New Year and included the exchange of gifts.  This festivity was considered riotous and licentious by early Christians but as Thomas Macaulay remarked  “Christianity conquered paganism, but paganism infected Christianity.”  In some northern Italian cultures she represents the Old Year and a puppet of an old lady is burned on a larger bonfire in a public square (Fellini captured that rite in his Amacord) – a pagan tradition that can be found in many Celtic cultures.

Though she is celebrated throughout Italy – and in many Italian communities worldwide – the town of Urbania in Pesaro is closely associated with La Befana.  From January 2 until the 6th the town celebrates La Festa Nationale della Befana with food, fairs, rides, games, parades and more Befane that you can shake a broom at.

These are a few sketches of the street decorations designed by Loris Grisi for this year’s festa – stockings, sacks of goodies, brooms, the only thing missing is the old lady herself.  But as this little sideshow proves there is no lack of guests-of-honour at this celebration. 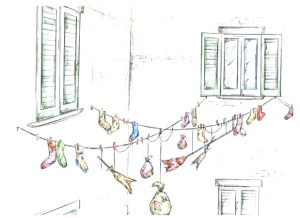 And hopefully on her journey tonight she has brought happiness and good things to all my dear friends in Italy.  Viva la Befana Viva!