Christmastide just wouldn’t be Christmastide without a visit with our favourite Scottish Falsetto Sock Puppets – well okay the field isn’t exactly flooded with Scottish Falsetto Sock Puppets to rank but you know what I mean.  Here they are with their own particular warped version of a well-known Christmas yarn.  – warped? yarn? … get it?   They’re made of wool and …..oh forget it! Bah humbug!

December 15 – 533: Byzantine general Belisarius defeats the Vandals, commanded by King Gelimer, at the Battle of Tricamarum.

As mentioned in previous year’s the Eaton’s parade was a Christmas highlight in Toronto, Winnpeg and Montreal.  Winnipeg had their own stock of floats and costumes but the Monday after the Toronto parade (Sunday was a day of rest at Eaton’s)  flatbed and freight cars were loaded and the entire parade was taken by rail to Montreal.  After FLQ bomb threats in 1969 Eaton’s cancelled the Montreal parade citing security concerns.  It was another 27 years before Santa would be seen riding down rue Sainte Catherine but in 1995 local business people revived the tradition.  The parade is now in it’s twentieth consecutive year and as popular as ever. 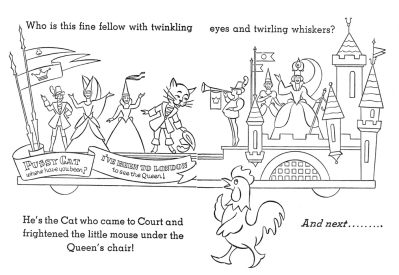 Seven years before Lindbergh landed in Paris Eaton’s Santa Claus made the trip from the North Pole to Toronto’s Leaside Areodrome on Eglinton Avenue in the far north-west of the city.   The air field  had been used for fighter pilot training but by 1919 was serving more commercial purposes.  That was also the year of the never to be repeated lions versus horses debacle.  In future parades Santa would ride over rooftops but only in in a sleigh with eight tiny reindeer.

This year’s colouring book has brought out some tidbits from friends who recall those glorious parades of yore.  Judy – who you may remember appeared in many of the parades – remembers having a tête-à-tête with Santa behind the scenes before he mounted his throne in Toyland.  And Vicki tells me that her husband’s Great Uncle not only worked on the floats as a carpenter but one year was one of the two Santas in the parade.

Two Santas?  Yes there were always two Santas – the one we saw cheerily waving at us and wishing us a Merry Christmas and another hidden in a car that followed behind with blacked out windows.  I guess they had learned from Miracle on 34th Street to always have a jolly old man in reserve.  I wonder just how they would have made the switch?

The moment we all had waited for – oh sure seeing Punkinhead, Cinderella and Mother Goose had been a pretty big deal but Santa!  Now that was the real thing!  That’s why we had lined up in the early hours of the morning to get a good curb seat and endured the cold, sometimes snow and once the rain.   Christmas had now begun. 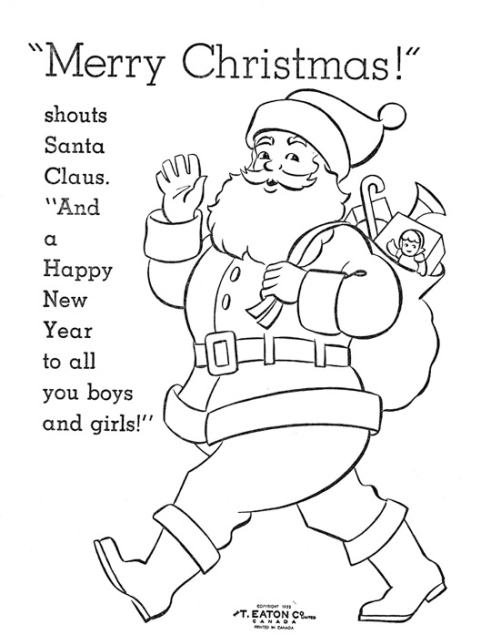 And it was off to Toyland – to the little railway that took you through a magic forest, the fish pond, a glimpse into Punkinhead’s den and finally snaking through the candy cane ropes to meet up with the big man himself.  A few whispered words, an assurance that all would be well and a reminder to tune in to CFRB and it was over for another year.  Time to head over to Diana Sweets for a hot chocolate and a sticky bun.

The Archives of Ontario have the 1953 Parade on video – just in case you want to see how you’re colouring scheme compared to the real one.  I always thought the icy floats looked better crayoned pink or blue – even at 7 I had the soul of an artiste.

November 27 – 1895: At the Swedish–Norwegian Club in Paris, Alfred Nobel signs his last will and testament, setting aside his estate to establish the Nobel Prize.

to all my American family and friends.

November 27 – 1835: James Pratt and John Smith are hanged in London; they are the last two to be executed for sodomy in England.

Leafing through the pages of the parade and comparing them to  a few clips of this year’s parade I wonder if children would even know this nursery rhyme?  The theories (yes there are entire books of the meaning behind various childhood rhymes) about who the lady is are many – Good Queen Bess? Lady Godiva? a local Banburian beauty? – an in some versions she becomes an old lady or has even had gender-realignment and is Young Johnny or Tommy.  I remember this was the little song that accompanied many a leg-horsy ride when I was a tot.

My friend Judy tells me she was a participant in the parade for ten years starting in the 1952 parade. She says ” (I) gradually worked my way up from a little kid sitting on a float, to walking for miles (usually with something outlandish on my head) to the ‘crowning’ glory of bring one of the major characters with a huge skirt and tiara.”  So she was one of those lucky kids I was so envious of!!

Though she didn’t show up in the 1953 Colouring Book, Mother Goose has appeared in more parades than any other fairy tale character.  Her first appearance was in 1917; the huge goose float that she first road on in 1930 was used for the next thirty years.  Each year the goose would get a fresh colour of paint – some years white, others pink, blue or yellow.

Despite a depression and two world wars the parade was an annual event – perhaps more needed in those dark times than any other.  In 1930 CFRB began to broadcast daily progress updates tracing Santa’s progress from the North Pole to Toronto – culminating in a vivid description festive march on the big arrival day itself.  It was a bright break in a time when news was anything but.

With Cinderella riding in a sparkling slipper this year there was no point in letting a perfectly good pumpkin go to waste.  A fresh coat of paint, new livery for the horses and Peter Peter Pumpkin Eater and his wife had an almost new way of getting down the parade route.  Ingenious solutions and recycling was nothing new for the parade craftspeople – after the imposition of rationing during the Second World War they had resorted to making new costumes out of paper.

Just a few more pages left to colour until the main event of the day:  Santa arrives!

November 25 – 1120: The White Ship sinks in the English Channel, drowning William Adelin, son and heir of Henry I of England.

I’m not sure how I missed this one. Disney meets Kander and Ebb? Well why not?

November 24 – 1815: Grace Darling, a lighthouse keeper’s daughter who was to become  a national heroine in Great Britain is born.