If there is one pasta that is associated with Bologna  it’s tortellini – those little crescent shaped packages filled with meat, cheese or vegetables. There appears to be some dispute as to whither the dish originated in Bologna or Modena but chances are you’ll see them on the menu in most towns in Emilia.  Often they are served in broth, dressed with cream or ladled with a meaty ragu.

However those wily Bolognese don’t just think of tortellini as a primi – take for instance this tempting plate in the picture. You really wouldn’t want to smother these in hot broth, cream or ragu. Chances are that would turn them into a gloppy mess of .. chocolate.

These incredibly rich white chocolate confections are the work of the people at Drogheria Gilberto on Via Drapperie; a sweet shop nestled among butchers and bakers and, believe it or not, candle makers in an area just off Piazza Maggiore.  It is a foodies paradise: shop windows hung with cured ham from Parma – included my beloved culatello – and local sausages, displays of cheeses that go well beyond the traditional parmigiana, trays of fish glistening on ice and stalls of vegetables that look so much like still lifes that its almost a shame to disturb their colourful symmetry. And then there is Gilberto with rows upon rows of chocolate truffles, fruit jellies, glacéed fruits, chocolate dipped cherries and citrus and those chocolate tortellini.

Legend says that Lucrizia Borgia sought lodging in a inn near Bologna during her travels. The innkeeper was enchanted by her beauty – as indeed the story goes were many men – and peeped through the keyhole while she was undressing. In the flickering candle light all he could catch was a glimpse of her navel but so smitten was he by even that brief vision of perfection that it moved him to create tortellini. I guess I can sort of see the resemblance, if not the attraction, and much like the reputation of the lady these are beyond decadent and give sinful a new dimension.

A few weekends ago when I was up in Milano and a stroll along Via Monte Napoleone was, as always, a treat for the eyes. All the upscale shops were sporting their Christmas decorations – some traditional, some trendy but all with that flair that is so Italian. Most were selling luxury items of the wearable sort but one was selling wonderfully over the top eatables. 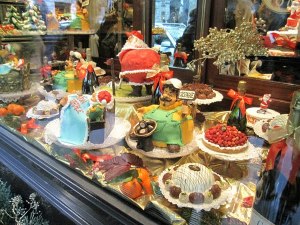 Cova Pasticceria Confetteria has been around since 1817 when it was founded by a pastry chef who had been a soldier in Napoleon’s invading army. Until 1950 the Cafe was located next to La Scala but after sustaining damaged during WWII they moved premises to Via Monte Napoleone. Their coffee is still amongst the best in town and their pastries and sweets fancy and fanciful but at no time are they more fanciful than at Christmas.

Though nowadays the Castagna (chestnut) seller is most likely to be a recently arrived immigrant the pastry chefs at Cova have harkened back to earlier days with this jolly be-moustached Italian marzipan street seller.

I’m not sure what they were implying with the Babbo Natale with the pacifier in his mouth and very Italian looking Mrs Santa but this is certainly a fun piece of spun sugar art.

The expression on this “tiny reindeer” suggests that he may be a little less than pleased with the idea of having to fly around the world tethered to a sleigh carrying a slightly over-weight man in a red suit. Particularly since the Jolly Old Man seems more interested in playing golf!

And this sugar and icing Alto-Adige ski village seemed almost prophetic for this year’s ski conditions in the North. Santa is finding the skiing just perfect thank you! And for apés-ski he can have some of Cavo’s wonderful hot chocolate.

The problem with all of these wonderful creations is that if I bought one I would hard pressed to break it up and eat it. Though I do know quite a few people who would have no such qualms.