Two weeks ago I featured a cartoon from the Halas & Batchelor studio and in the comments my friend Spo mentioned that it reminded him of Fractured Fairy Tales. Now anyone who ever watched television after school in the early 1960s likely has fond memories of following the adventures of Rocky and Bullwinkle. 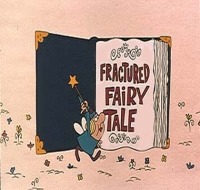 But our “heroes” were not alone, their attempts to dodge the dastardly duo of Boris Badenov and Natasha Fatale were interspersed with all manner of cartoon madness: Mr. Peabody took Sherman through history; Aesop attempted to teach is less than willing son moral lessons; and Dudley Do-Right never got his man nor sweet Nell.

But my own favourite was always the aforementioned Fractured Fairy Tales as told by the incomparable Edward Everett Horton. Beloved children’s’ tales were upended, twisted and tortured beyond recognition always with the distinctive voice  of June Foray as all the female – and a few of the male – characters.   On occasion the same fairy tale would be tackled and twisted in a different manner but it was a given that little of the original story would remain – as witness these two versions of Cinderella.

Among the other recognizable voices were Paul Frees (Prof Ludwig von Drake), Daws Butler (Quick Draw McGraw) and Bill Scott (Bullwinkle).  We never saw the faces but those voices were recognizable the minute they – or rather the characters – opened their mouths.

And I had to included this one if only for the Wolf’s reading material – remembering that this is 1961. R & B could be Rocky and Bullwinkle, Rhythm and Blues, or Rude and Blue!!!!!

On this day in 1992: The Charlottetown Accord fails to win majority support in a Canada wide referendum.

Halas and Batchelor Cartoon Films was founded in 1940 by husband and wife team John Halas and Joy Batchelor; over the next 58 years they were to be one of the premiere animation studios in Western Europe.  Their output include 70 propaganda films during the Second World War, children’s shows, full length cartoons (the first was Animal Farm in 1954 – unwittingly a propaganda film clandestinely funded by the CIA), musical shorts, educational cartoons and a series based on the popular books of Gerald Hoffnung – he of the Interplanetary Music Festival.

In 1961 they introduced Hamilton the Musical Elephant in two charming little shorts with soundtracks by British jazz great Johnny Dankworth (it was only later that he became the more formal John).

You have to wonder why the little guy only appeared it two cartoons though perhaps the creators wisely thought there were only so many plot lines you could create for a trumpet playing forgetful elephant.

April 6 -1327: The poet Petrarch first sees his idealized love, Laura, in the church of Saint Clare in Avignon.

I’m not at all sure if children still read Edward Lear (I’m sure some must) but I always found his word play enchanting.  He conjured up such pictures of Jumblies, floating Owls and Pussycats, and various old men and ladies of sundry places whose strange habits made for wonderful limericks.

I thought I’d start off my week by revisiting a few of my favourites.  However since I didn’t have one of his many books at hand I thumbed clicked through the videos on YouTube and came up with these two very different but fun animations of classic Lear stories.

There is a wonderful website devoted to Lear and his various writings, drawings and creations.  As well they have some fun examples of early limerick books for slightly before Lear’s time.

A delightful piece of animation but do watch the whole thing – right through to the end of the credits!

Many thanks to my friend Larry for posting this on FB a few days ago. 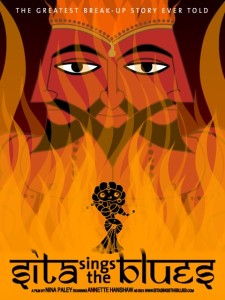 A friend in Athens introduced me to a wonderful piece of animation: Sita Sings the Blues. Created by independent film maker Nina Paley it is a brilliant take on the Rama and Sita legends mixed with blues songs from one of the great forgotten vocalists of the 1920s-1930s Annette Hanshaw. In this clip she sings Who’s That Knocking At My Door – a great little number and I just love her signture tag: That’s All!

The witty combinations of animation and visual styles, the parallel story of modern day Nina with the great Ramayana legend as seen from Sita’s point of view, the shadow puppet commentators and the introduction of American blues makes for an animation classic.

The intriguing story behind its creation and Paley’s decision to make free downloading available can be found here. And of course Sita has its own website here.