As I sat here on a rainy afternoon with my two Hounds from Hell curled up dozing on the couch beside me I recalled a post I wrote back in 2014. It was a short photo essay on a recent monument in Centennial Park in Ottawa remembering the oft unremembered animals that perished serving Canada’s war efforts over the past century or more.

I had only seen one other monument that acknowledged those causalities in London back in 2010 and wrote about at that time.

Remembrance Day is a time to bring to mind all creatures, great and small, that gave everything.

Though the first shots were fired on July 28, 1914 the declarations of a war that was to bring about the downfall of four Imperial powers, change the map of Europe and destroy the lives of millions were not issued until August 3 and 4th. Until that point the tensions that had arisen from the entirely serendipitous assassination of Archduke Franz Ferdinand and his wife Sophie had been more like a family squabble than the prologue to a devastating war that would resound into our current century.  It was only going to last a few weeks but by November of the same year the editor of the Canadian magazine Maclean’s wrote, “Some wars name themselves. This is the Great War.”

As a nation Canada’s first overseas war had been the Second South African War (the Boer War) in 1899; Canada sent troops but the country was bitterly divided along political…

In the famous Charge of the Light Brigade it is estimated that the British lost over 335 horses and that during the 1914-18 War on the Belgian Front alone 800,000 horses were killed. And a conservative figure lists 40,000 war dogs used by the Allied Forces died in that same conflict which ended in a stalemate and an Armistice. The totals for other campaigns are as staggering for animals that served as mounts, war machines, carriers and vehicles of communications. 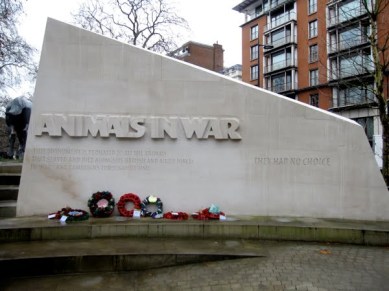 And given that the British are known for their animal rights activism I am frankly surprised that it has taken so long for a monument to be erected remembering the animals that died in various armed campaigns throughout the ages. In a city overwhelmed with monuments in prominent locations to long forgotten heroes (?) of often long forgotten wars it is a shame that this lovely tribute to those who did not have “ a choice” is lost in the middle of one of the busiest thoroughfares in the city. I happened upon it as I was leaving Hyde Park near Speakers’ Corner to cross Park Lane and return to the hotel. 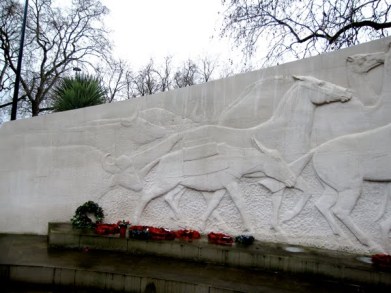 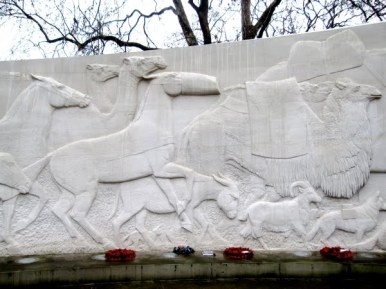 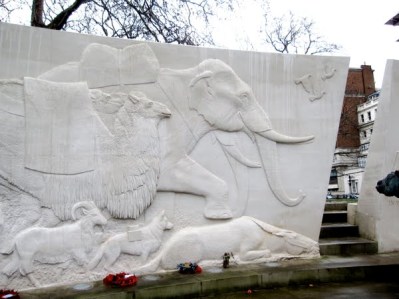 sssssssssssssssss
The monument was created by sculptor David Backhouse and dedicated in November 2004 by the Princess Royal in the presence of a goodly number of people who had contributed to its creation including Dame Vera Lynn. When I passed it on Friday there were still wreaths strewn around the base from last November 11th commemorations from various animal societies and individuals as well as a few more recent tributes. 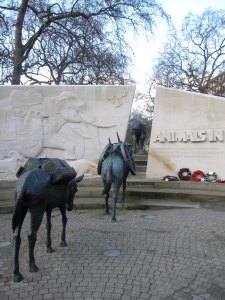 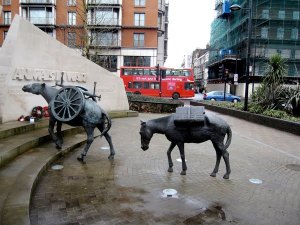 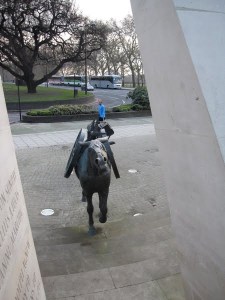 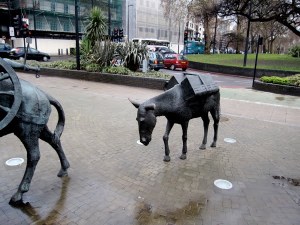 The four bronze figures parade through a crevice in a stone wall lead by a cavalry horse. the rear of the procession being brought up by, it seems to me, a sad and rather reluctant mule carrying munitions. I do find it strange that in this procession the dog cannot be viewed through the crevice in line with the other animals – though that may just be my prejudice in favour of canines speaking. 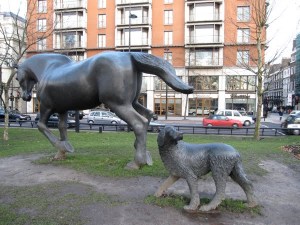 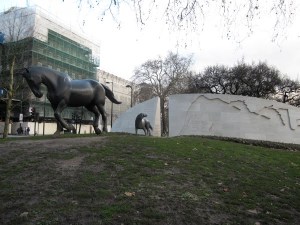 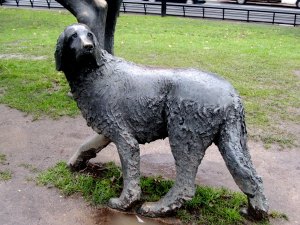 Though the dog in question does appear to be looking back and urging on the ghost image of his fellows incised into the back wall – the elephants, camels, goats, horses and birds used in the various battles that Britain has fought through the centuries and throughout the world. In a rather strange oversight though a flight of carrier pigeons are included the caged wrens that were used to test for the presence of poisoned air during the Great War are missing. 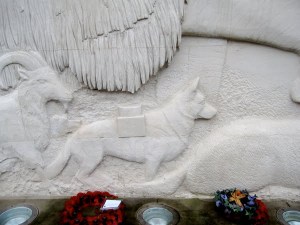 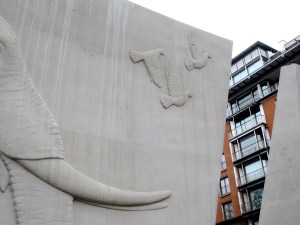 But the mere fact that this tribute exists is a wonder and the fact that while I was photographing it a good number of people stopped to look at it. There was one trio of young trendy types who ended up spending as much time as I did looking at it and an overheard comment suggested it had made them stop and reflect in a way that other monuments to forgotten battles had not.

Perhaps it is my own fondness for animals but I found it a touching and emotionally moving tribute to creatures that went into battle because “They had no choice.”