… but the best bear in the world.

He first appeared in one of the forty-five poems in A. A. Milne’s When We Were Very Young in 1924, but on October 13, 1926 one of the most beloved bears of childhood – and for some of us adulthood – came into his own when Winnie-the-Pooh was published.  The Bear of Little Brain was to appear again two years later in The House at Pooh Corner (1928)  and in eleven of the poems in Now We Are Six (1927).

Much has been written about the origins of Winnie-the-Pooh and his friends – how he got his name, the setting in Ashdown Forest, what inspired Milne to write his stories, and the fame and discomfort success brought to Christopher Milne.  There is even a new movie that purports to tell the “untold story” of how the books came to be written – though you have to wonder how much of the story really is left to be told.

Whatever the inspiration or origins may be for the past 90 years Christopher Robin’s little bear has been enchanting children and reminding adults of the joys of their own childhood.  For 90 years Milne’s words and E. H.. Shepard‘s illustrations have taken us to Pooh Corner, The Enchanted Place and introduced us Poohsticks  Sadly several generations of children are now growing up with the “cutesy” Disney version as their point of reference rather than the gentler, less garish, less knowing – dare I say more English – stories that Milne wrote and that Shepard captured in his drawings.

To celebrate that collaboration the Victoria and Albert Museum is opening an exhibition – on my birthday, wouldn’t you know! – featuring sketches, letters, photographs, cartoons, and fashion from the partnership.  A left click on that little passage from Winnie-the-Pooh (above left) will take you to their website and a few of the delightful things that will be on display.

Though I have quoted it once before I do so again with no apologies.  I don’t believe anyone has ever captured the bittersweetness of leaving behind childhood as beautifully as this final passage from The House At Pooh Corner.  And I have never read it without tearing up just a wee bit.

Suddenly Christopher Robin began to tell Pooh about some of the things: People called Kings and Queens and something called Factors, and a place called Europe, and an island in the middle of the sea where no ships came, and how you make a Suction Pump (if you want to), and when Knights were Knighted, and what comes from Brazil. And Pooh, his back against one of the sixty-something trees and his paws folded in front of him, said “Oh!” and “I didn’t know,” and thought how wonderful it would be to have a Real Brain which could tell you things. And by-and-by Christopher Robin came to an end of the things, and was silent, and he sat there looking out over the world, and wishing it wouldn’t stop. 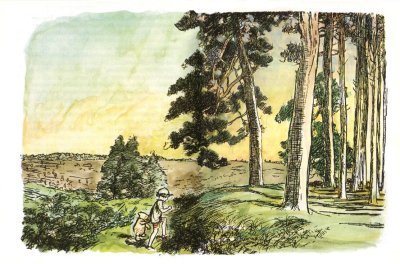 But Pooh was thinking too, and he said suddenly to Christopher Robin:

“Is it a very Grand thing to be an Afternoon, what you said?”

“A what?” said Christopher Robin lazily, as he listened to something else.

“On a horse,” explained Pooh.

“Oh, was that it?” said Pooh. “I thought it was a– Is it as Grand as a King and Factors and all the other things you said?”

“Well, it’s not as grand as a King,” said Christopher Robin, and then, as Pooh seemed disappointed, he added quickly, “but it’s grander than Factors.”

“Of course he could!” said Christopher Robin. “I’ll make you one.” And he took a stick and touched Pooh on the shoulder, and said, “Rise, Sir Pooh de Bear, most faithful of all my Knights.”

So Pooh rose and sat down and said “Thank you,” which is a proper thing to say when you have been made a Knight, and he went into a dream again, in which he and Sir Pump and Sir Brazil and Factors lived together with a horse, and were faithful Knights (all except Factors, who looked after the horse) to Good King Christopher Robin . . . and every now and then he shook his head, and said to himself, “I’m not getting it right.” Then he began to think of all the things Christopher Robin would want to tell him when he came back from wherever he was going to, and how muddling it would be for a Bear of Very Little Brain to try and get them right in his mind. “So, perhaps,” he said sadly to himself, “Christopher Robin won’t tell me any more,” and he wondered if being a Faithful Knight meant that you just went on being faithful without being told things.

Then, suddenly again, Christopher Robin, who was still looking at the world with his chin in his hands, called out “Pooh!”

“I’m not going to do Nothing any more.”

Pooh waited for him to go on, but he was silent again.

“Pooh, when I’m–you know–when I’m not doing Nothing, will you come up here sometimes?”

“Pooh, promise you won’t forget about me, ever. Not even when I’m a hundred.”

Pooh thought for a little.

Pooh nodded. “I promise,” he said.

Still with his eyes on the world Christopher Robin put out a hand and felt for Pooh’s paw.

“Pooh,” said Christopher Robin earnestly, “if I–if I’m not quite” he stopped and tried again –“. Pooh, whatever happens, you will understand, won’t you?”

“Oh, nothing.” He laughed and jumped to his feet. “Come on!”

So they went off together. But wherever they go, and whatever happens to them on the way, in that enchanted place on the top of the Forest a little boy and his Bear will always be playing. 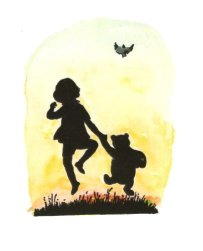 This post was inspired by my FaceBook friend Christopher and is for him and all my friends who though they have put away childish things still hold childhood in their hearts.

On this day in 1656: Massachusetts enacts the first punitive legislation against the Religious Society of Friends (Quakers). The marriage of church-and-state in Puritanism makes them regard the Quakers as spiritually apostate and politically subversive.

6 thoughts on “A Bear of Very Little Brain”