No not Tart (a nubile young temptress, who dresses teasingly and provocatively) I mean tart (a small pie filled with cooked fruit or other sweetened preparation, usually having no top crust).  Though if that Tudor series that was so popular a while back is to be believed there were more of the former than the later in Bluff Harry’s 55 year span on this earth.  I’m referring to a tasty little morsel (no not Anne Bullen!  honestly such minds!) that has graced afternoon and high tea tables for well over 500 years in England and even here in her Colonies:  Maids of Honour.

What brought me to investigate this tempting little sweetie (not Catherine Howard either!  Jeesh!) was the passage I quoted from The Good Companions last week.  It described the groaning high tea table at the Second Resurrectionists do in Oxwell as including “piles of jam tarts and maids of honour and cream puffs and almond tarts,”.  So asked a faithful reader in perusing that list: what exactly are Maids of Honour?

Well it turns out that it’s a little bit like a cheesecake and a little bit like a tart.  So what’s the connection with Henry VIII?  Well history – or legend, which is often the same thing – says that on a visit to Anne Bullen during their early courtship the King happened upon Anne and her Maids-of-Honour enjoying a new sweet that a local pastry-cook had offered them.  Eyeing the little tarts (no not Jane Seymour!  You lot are too much!) he ate several and declared them as delicious as Anne and her Maids-of-Honour (Okay maybe even then he was eyeing Mistress Seymour) and immediately demanded the recipe.  There was a rumour that he locked the recipe away and decreed they were for Royal Consumption only – or that he locked the innovative but unfortunate pastry-cook away and only allowed him out to make the tarts at royal whim.   Given the list of ingredients (see below) it’s difficult to imagine who could have afforded to make this little delicacy other than Royals and the nobility?  And  since only the palaces and great houses had ovens – most cooking was still done over, often communal, open hearths – it was to remain a royal treat for a good long time.  Or at least until, according to another story, in the 18th century a lady at court, who had lost a good deal of money at cards, sold the secret to a baker in Richmond.  As with many culinary legends these events are likely apocryphal but they do make for a good story over a nice cup of tea. 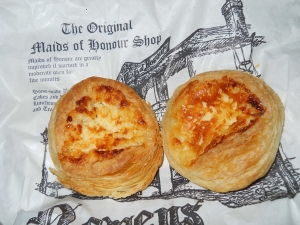 And that is where they next make their appearance in the history of cookery: in a tea shop.  In 1850 Robert Newens, a young apprentice pastry-cook, took note of their popularity in Richmond  and open a refreshment stop on the road to Kew Gardens serving tea and the royal sweetmeat.   The little tarts were so popular he named his shop after them.  It is only recently that the Newen family ceased to be involved with the The Original Maids of Honour.

Though they have made some controversial changes to the “original” it seems that the Newens family guard the recipe as carefully as did the Royal Gourmand.  Fortunately other cooks are not as secretive and there seem to be as many variations out there as there have been Maids of Honour in the Royal household since Old Coppernose* first consumed them.

The one below is from Traditional Teatime Recipes, a National Trust book  by tea expert Jane Pettigrew  – a compilation from tea rooms at Trust sites throughout the country.  It is unusual in that it is the only one I found that includes cold mashed potatoes in the filling.  This was not unknown as a thickener and filler in many Renaissance recipes – so this may very well be “the original”.

On a lightly floured board, roll out the pastry and cut 24 circles using a 7.5cm( 3in) cutter. Use to line the prepared patty tins. Beat together the curd cheese and butter. Add the beaten eggs, brandy and sugar and beat again. In a separate bowl beat together the mashed potatoes, ground almonds, nutmeg, lemon rind and juice, and gradually mix in the cheese mixture. Beat thoroughly.

Spoon into the pastry cases and bake for 35–40 minutes until risen, golden and firm.

Remove from the oven and leave to cool in the tins for 5–10 minutes before lifting carefully on to a wire rack to finish cooling.

Once the frenzy of cooking for Thanksgiving is over I’m going to give these a try.

*I had never seen this sobriquet applied to  Henry VIII but it was used derisively by the populace when in 1544 he debased the coinage by reducing the silver content to one third. This had an unfortunate effect: the silver on the nose of his high relief image wore off revealing the copper beneath. This example from the Metropolitan Museum collection seems to be in good condition – on the nose at least.

On this day in 1906: San Francisco public school board sparks a diplomatic crisis between the United States and Japan by ordering Japanese students to be taught in racially segregated schools.